I’d been wanting to build my own electric guitar (well, several of them, actually), so for Christmas my wife gave me a JEM-clone guitar kit from BYOGuitar.

When the box arrives this is basically what you see: 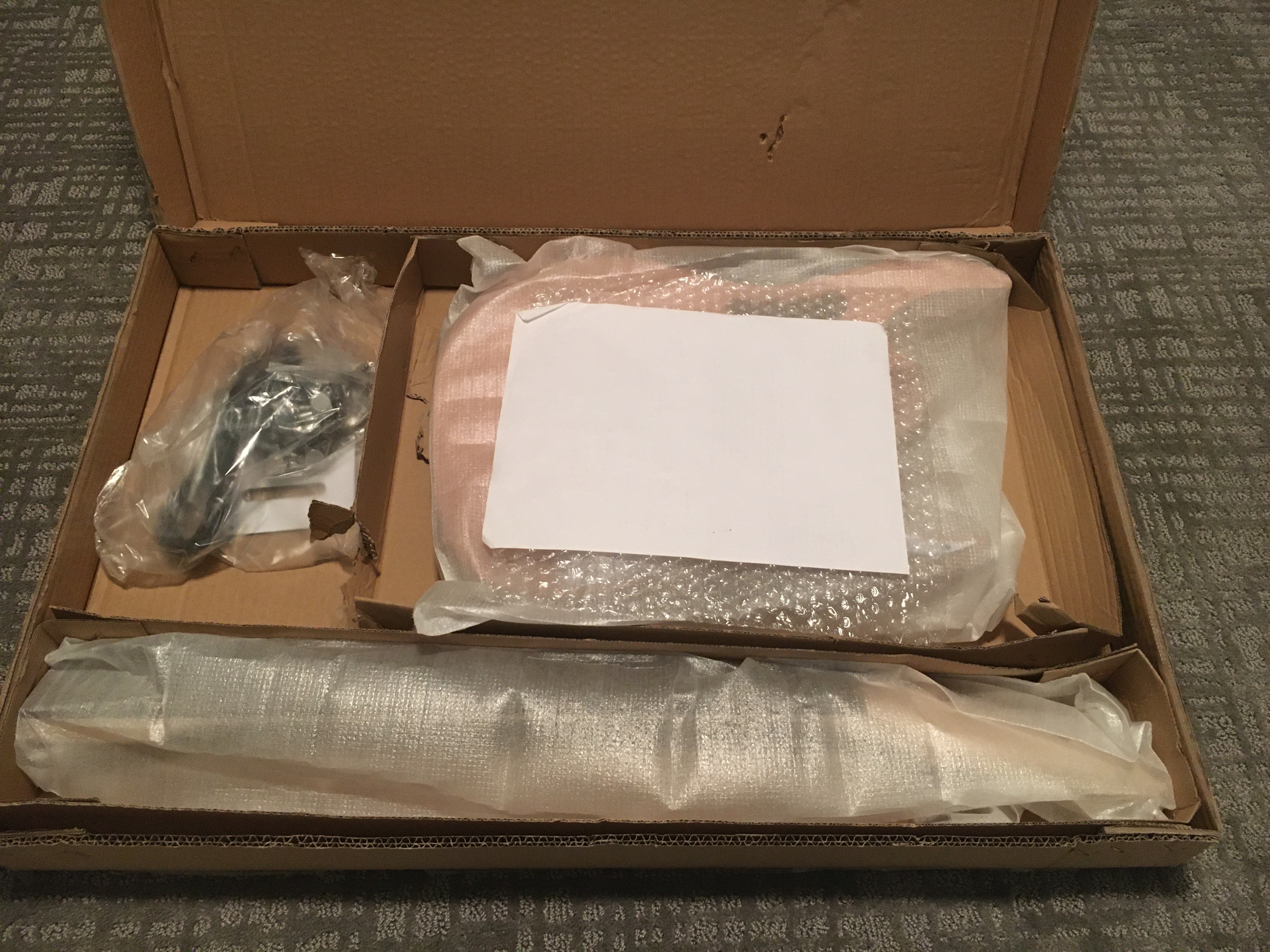 The basic intent, I think, is for it to look like an Ibanez JEM7V, although since all the provided hardware is not gold but chrome it would actually end up looking more like an Ibanez JEMJR. The kit guitar has a mahogany body, like the JEMJR but unlike the JEM7V which has an alder body. I prefer mahogany anyway so I am fine with this.

It does feature the monkey grip handle and lion’s claw rout behind the tremolo, key characteristics that identify a JEM guitar and distinguish it from an Ibanez RG-series (otherwise they are pretty similar). You can see this clearly in this early fit test I did at the beginning of the build: 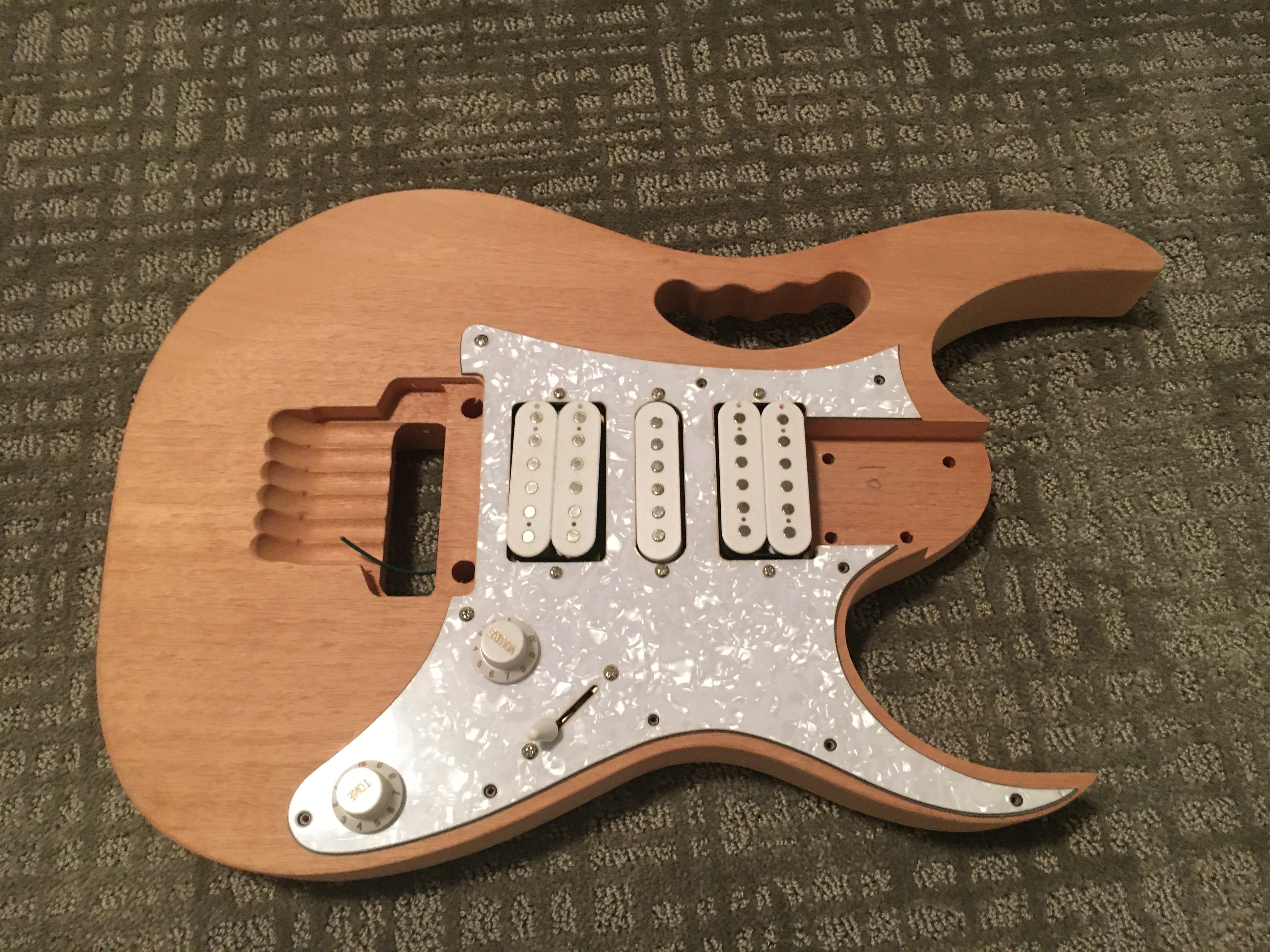 Another key characteristic of many JEM models is the Tree of Life inlay on the neck, and this guitar also features that. 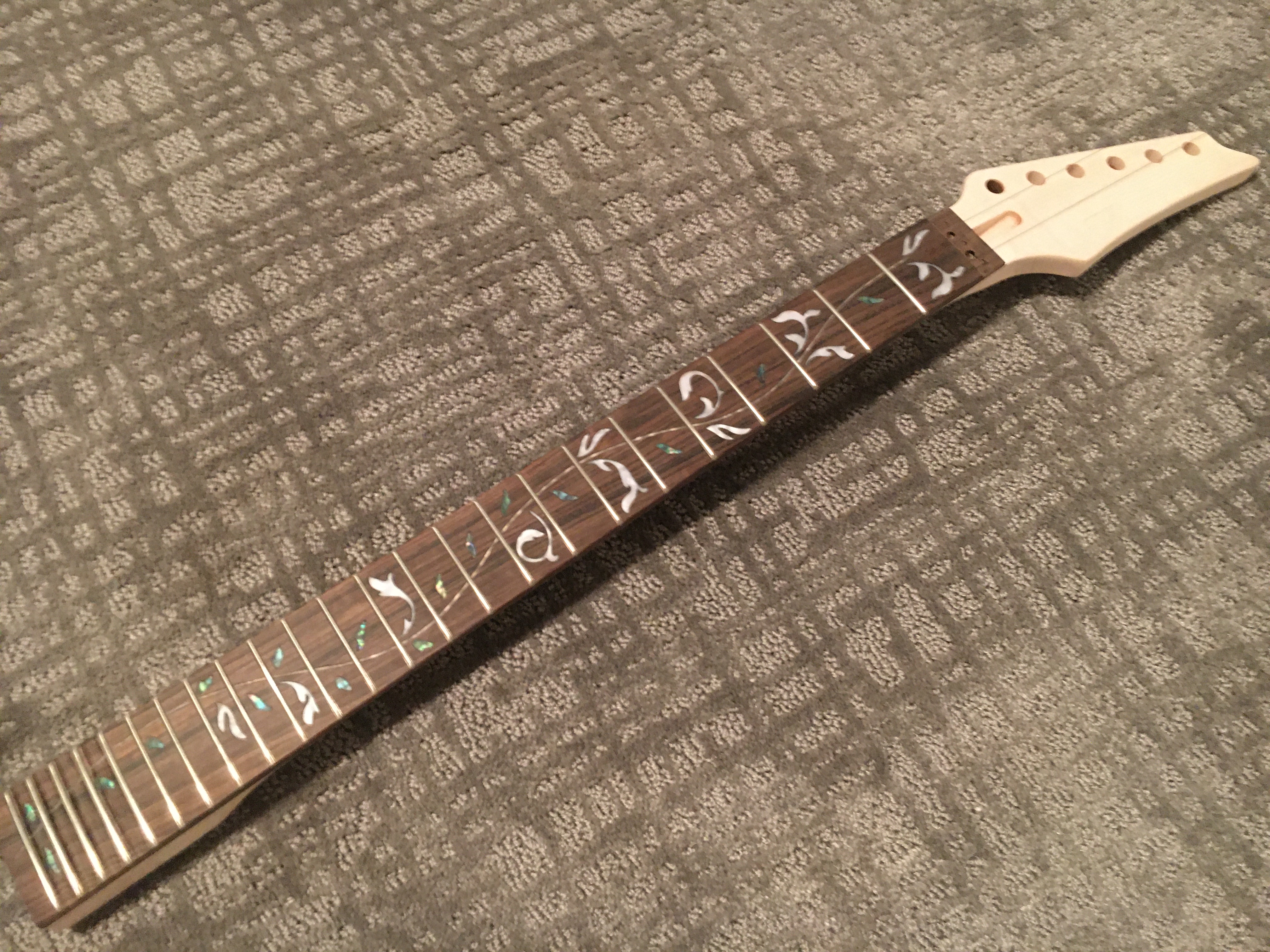 The fretboard is rosewood, which I like fine and is pretty standard for many JEMs, although I prefer the look and sound of ebony a little more. The neck itself is a similar profile to Ibanez Wizard style necks, like on the JEMs. This is a great, thin neck profile, really fast and easy to play. On this kit the neck is a 5-piece maple neck with two walnut stripes running the length of the neck, which looks great.

One of the first problems I had with this body was that there is no routing cutout in the back for the plate that covers the tremolo springs. You can see it in this picture. That big cutout spot in the middle of the body is where the tremolo springs go. On a JEM guitar, there’s a plastic plate that covers that, and it sits inside a routed-out border so the plate is flush with the rest of the body. You can see what I mean in the other cutout toward the top left, which does have this routed-out-border for it’s cover plate. 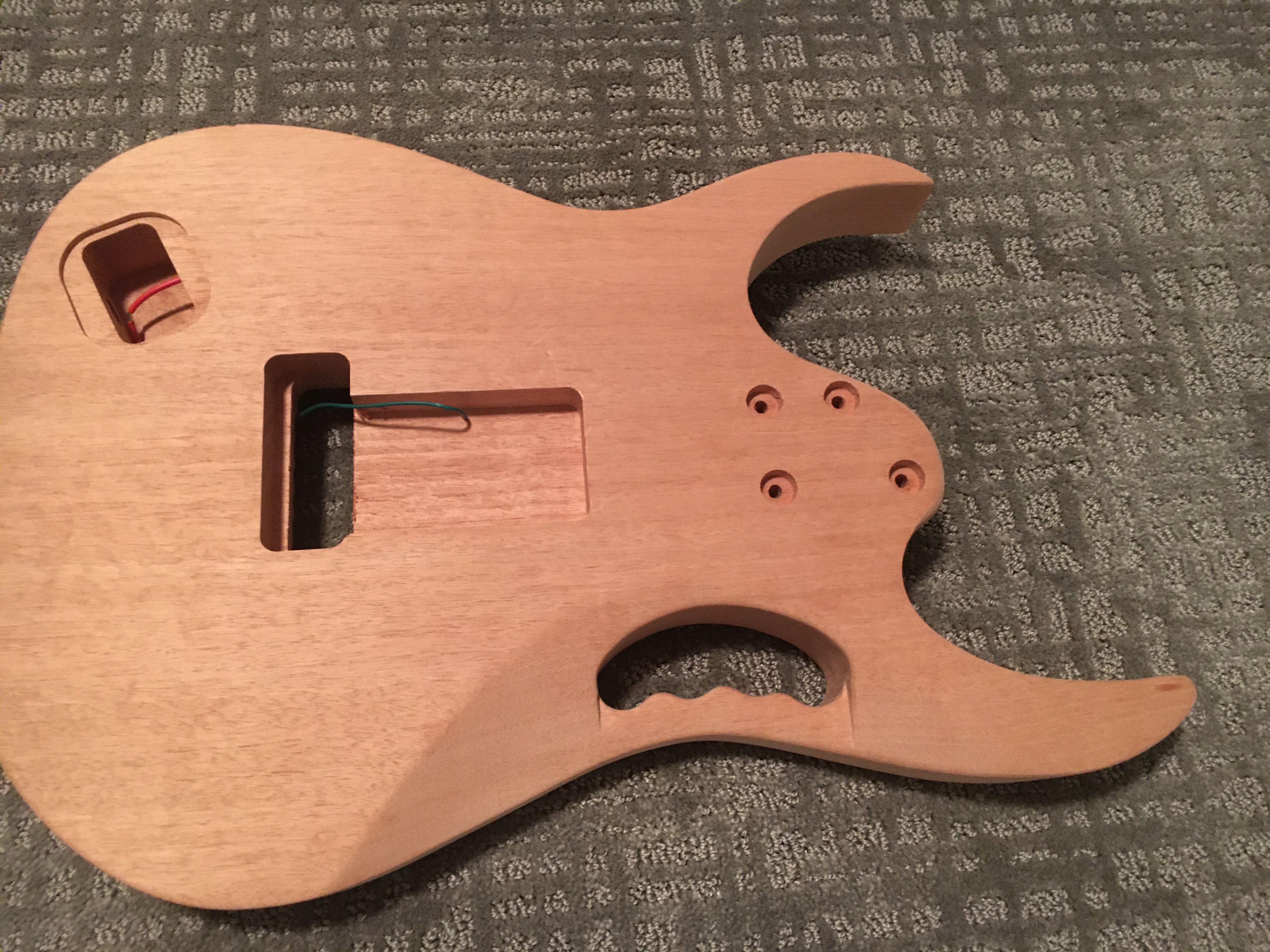 I emailed BYOGuitar about this, thinking that they must have forgotten to do that part on this body, but they said that is standard (despite, as I pointed out to them, the pictures on page 12 of their instruction manual - they told me those pictures are out of date). BYOGuitar told me that now the idea is you just attach that plate on the back of the guitar to the surface. I know some guitars (I’m looking at you, Fender Stratocaster) do this, but that is not good enough for me. So I set out to enlist my friend Michael to help me rout that out of the back of the guitar. 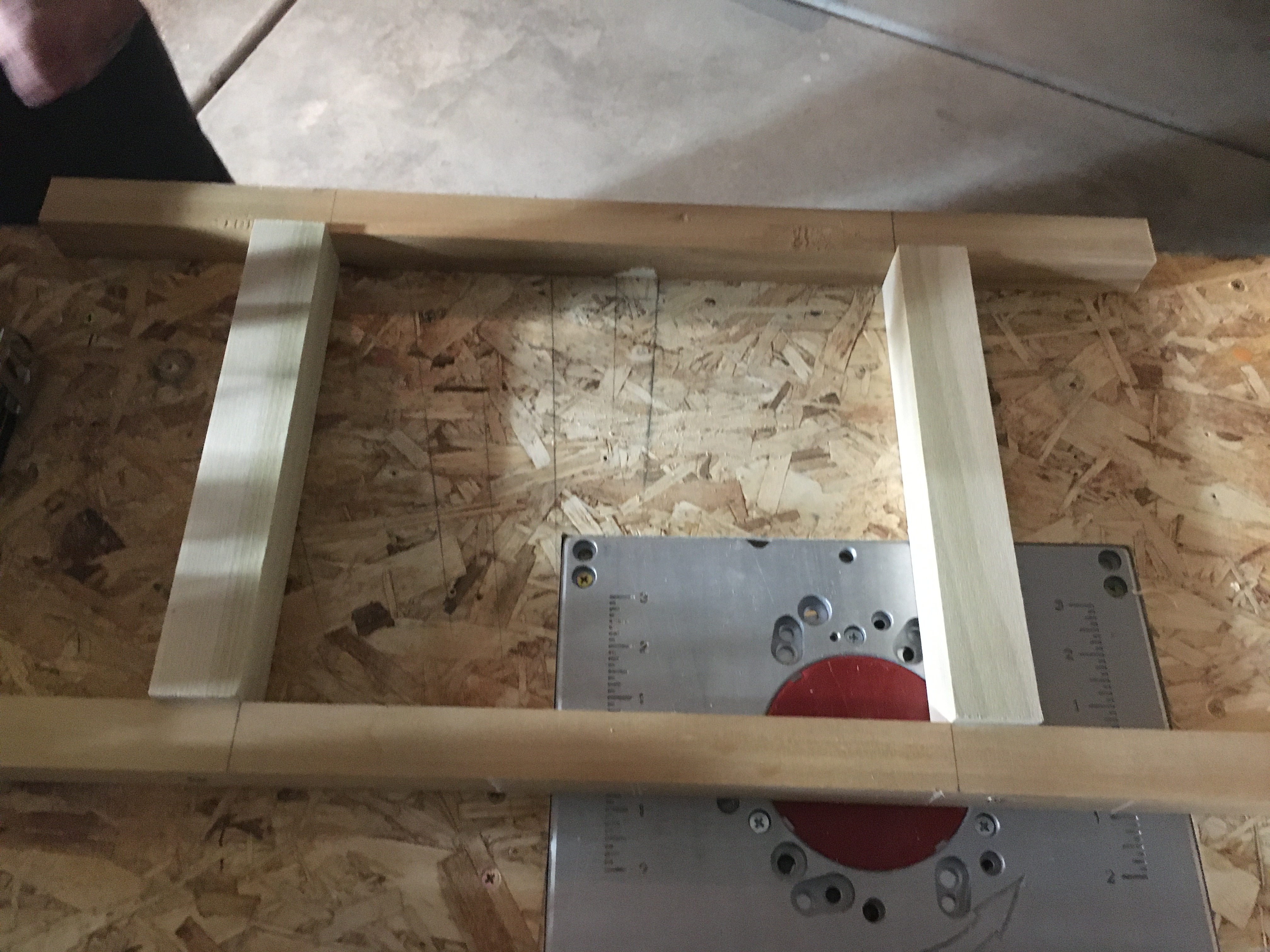 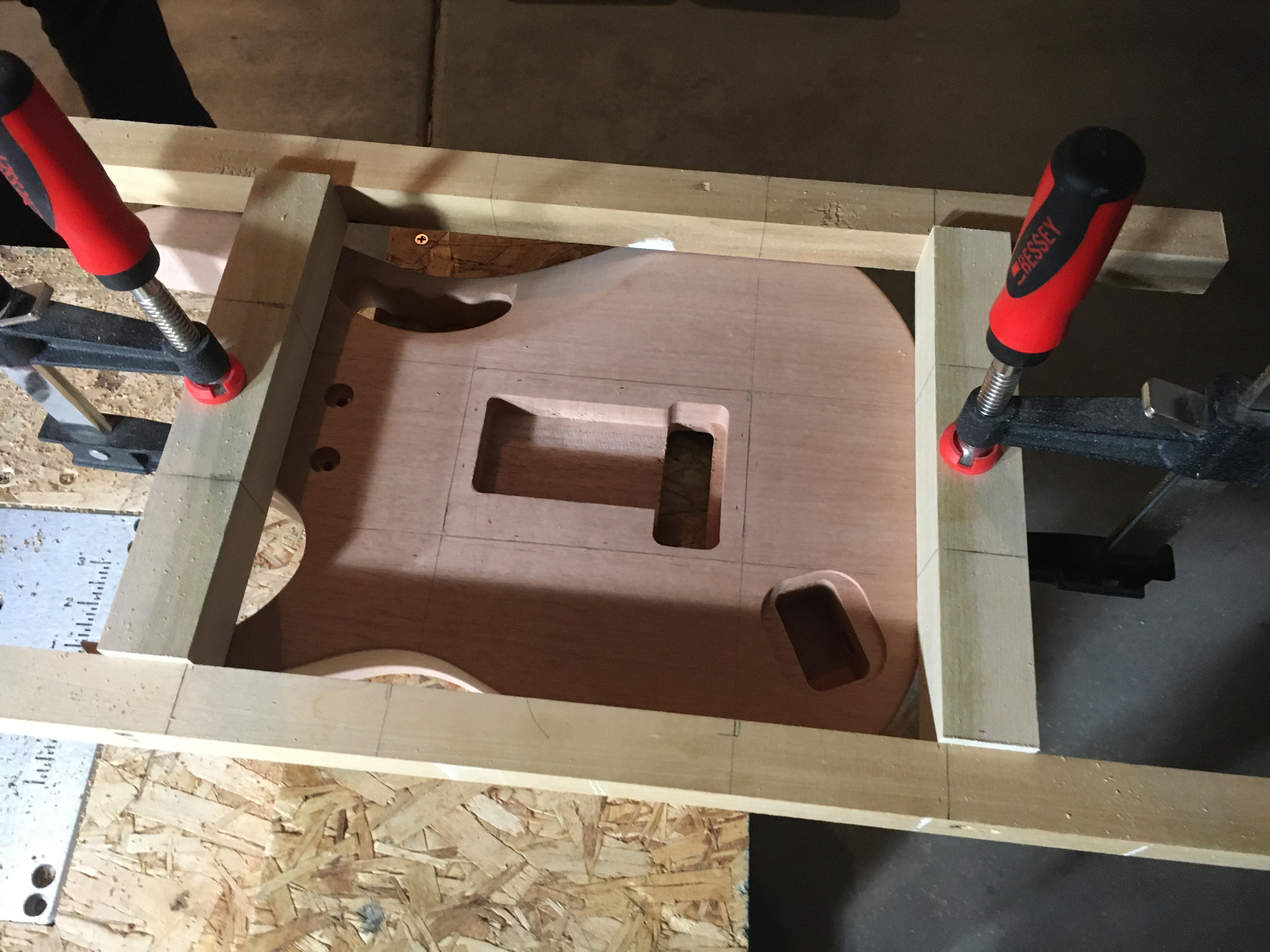 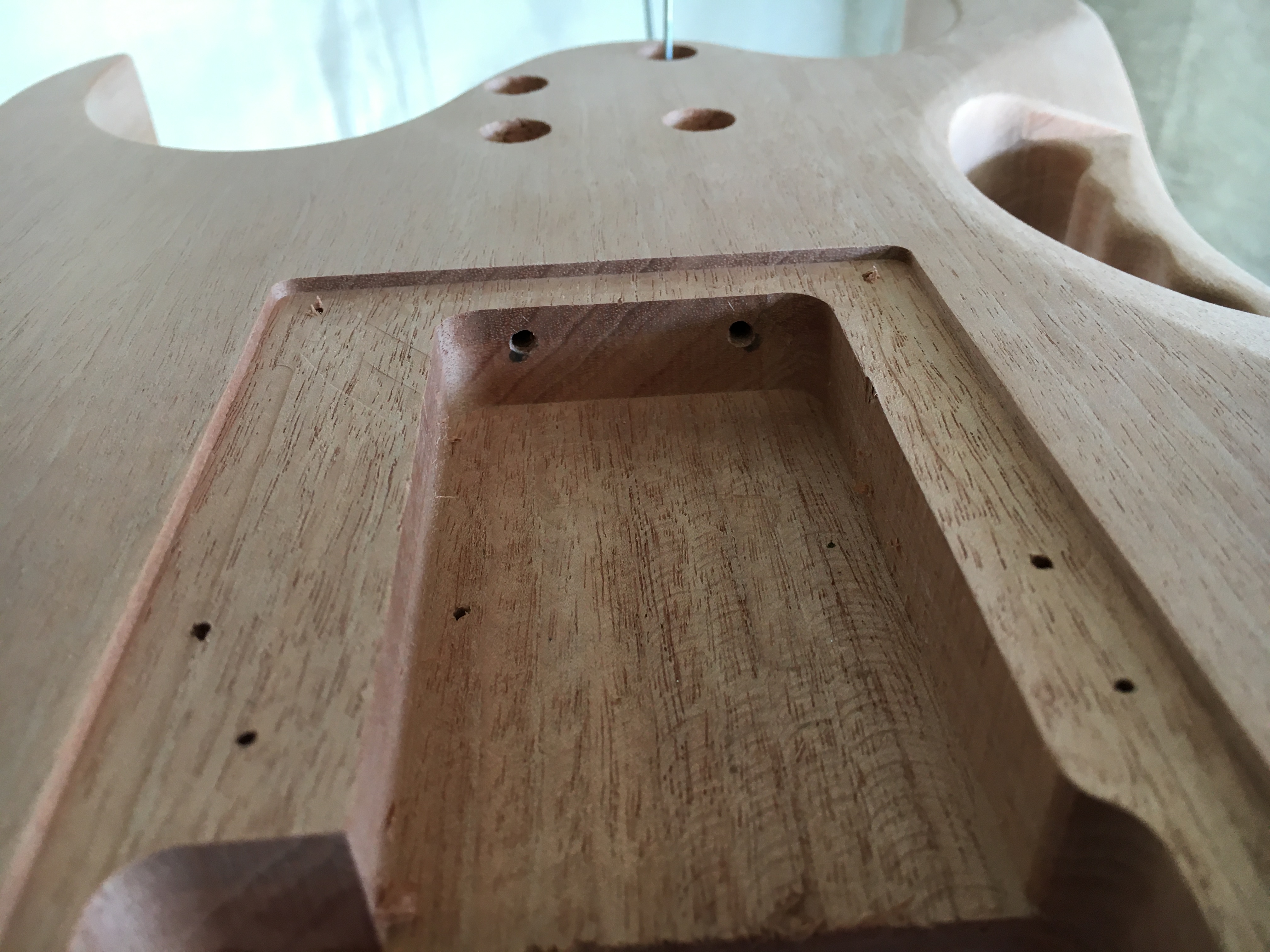 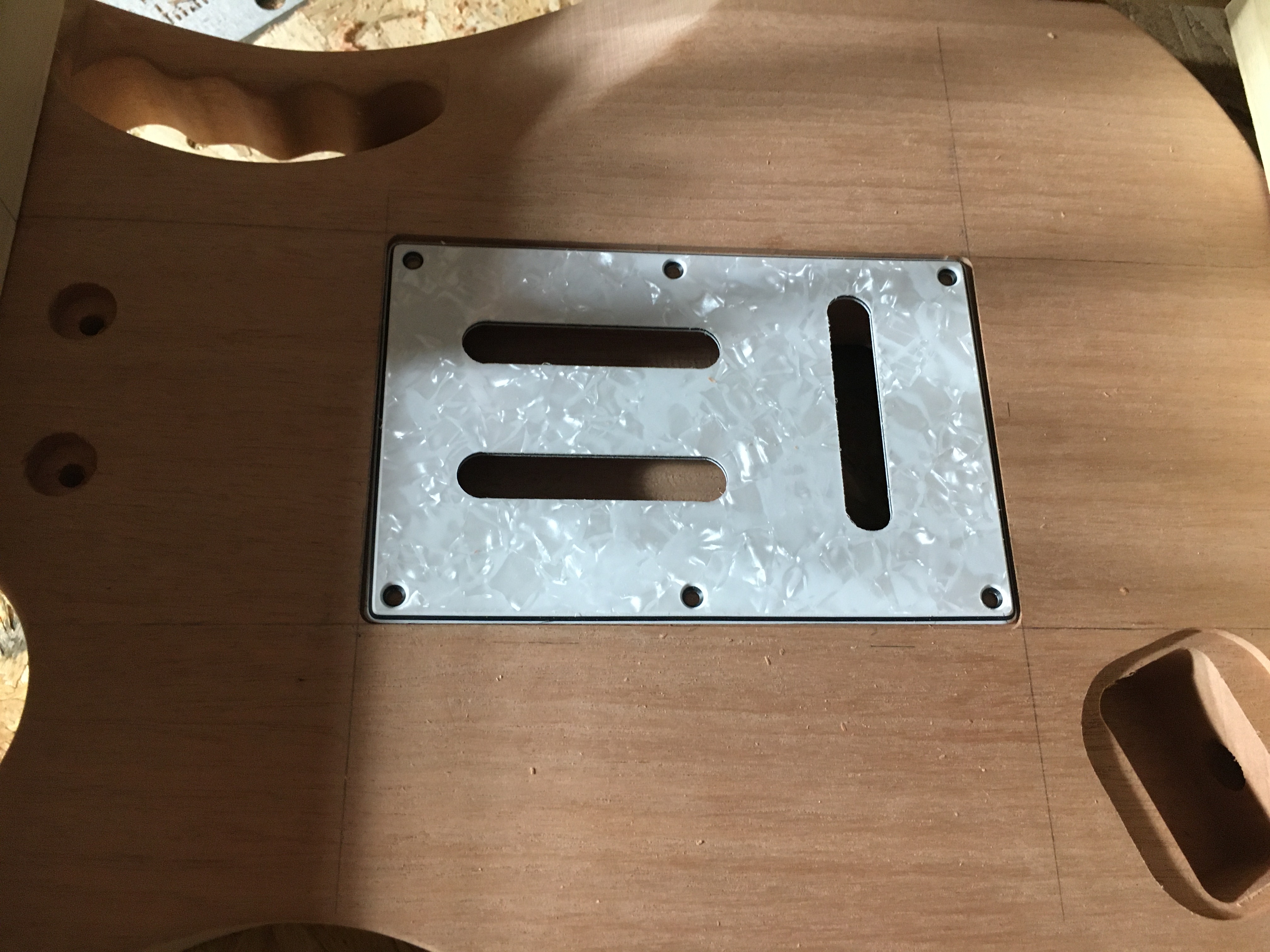 Next came body prep. This step requires a great deal of patience and determination. I sanded the body with increasing grit levels of sandpaper (120, 180, 220, 400). Once it was pretty smooth I got some wood filler and scraped that across all the primary surfaces. There are small gaps in the wood grain that you almost don’t notice but which showed up especially during the first forays into painting the body. Fill these spots, let the wood filler dry, then sand and sand again.

In the process of sanding I dropped the body once or twice and that unfortunately made some dents in the wood which I had to sand out. Try not to do this. 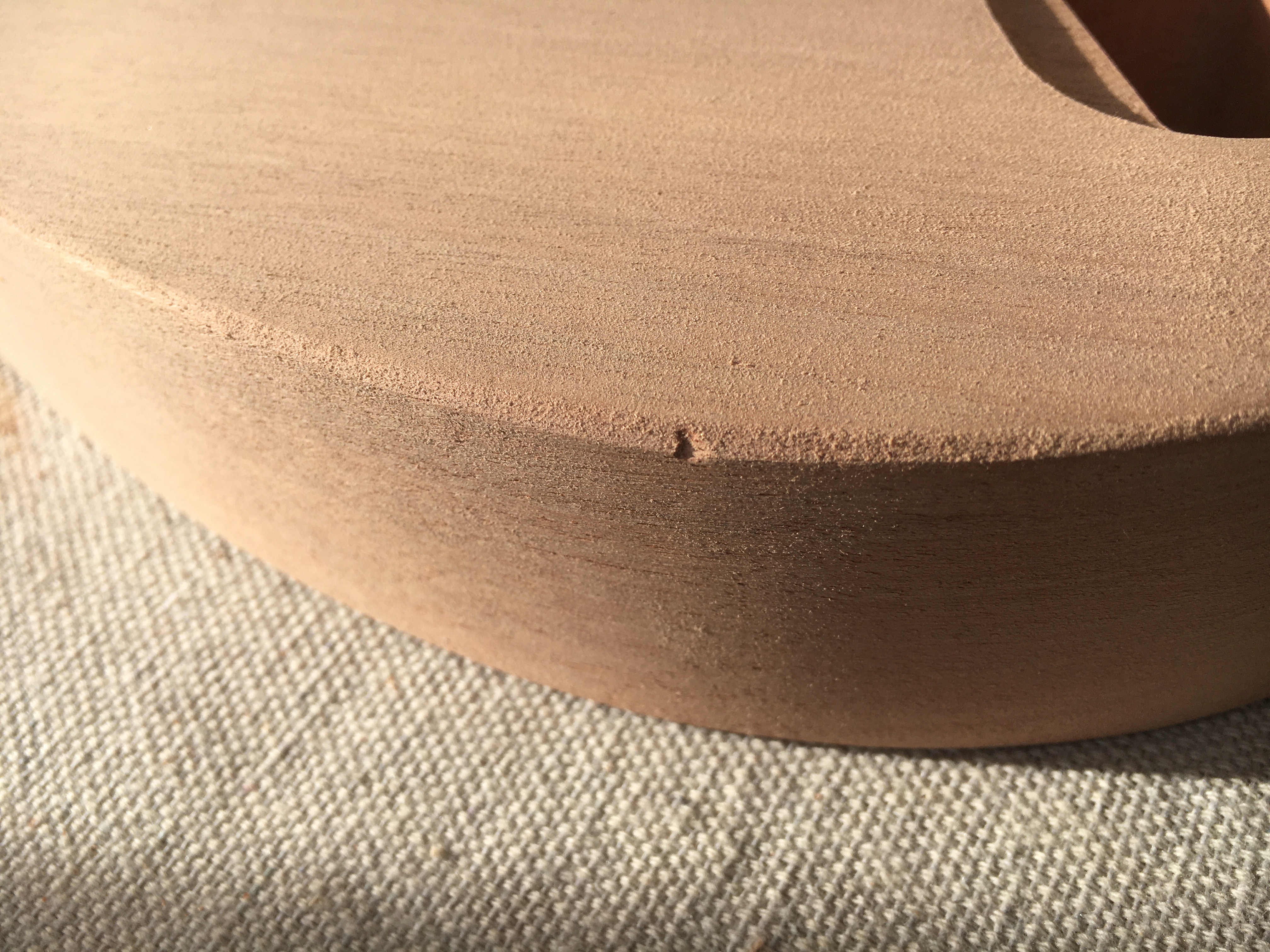 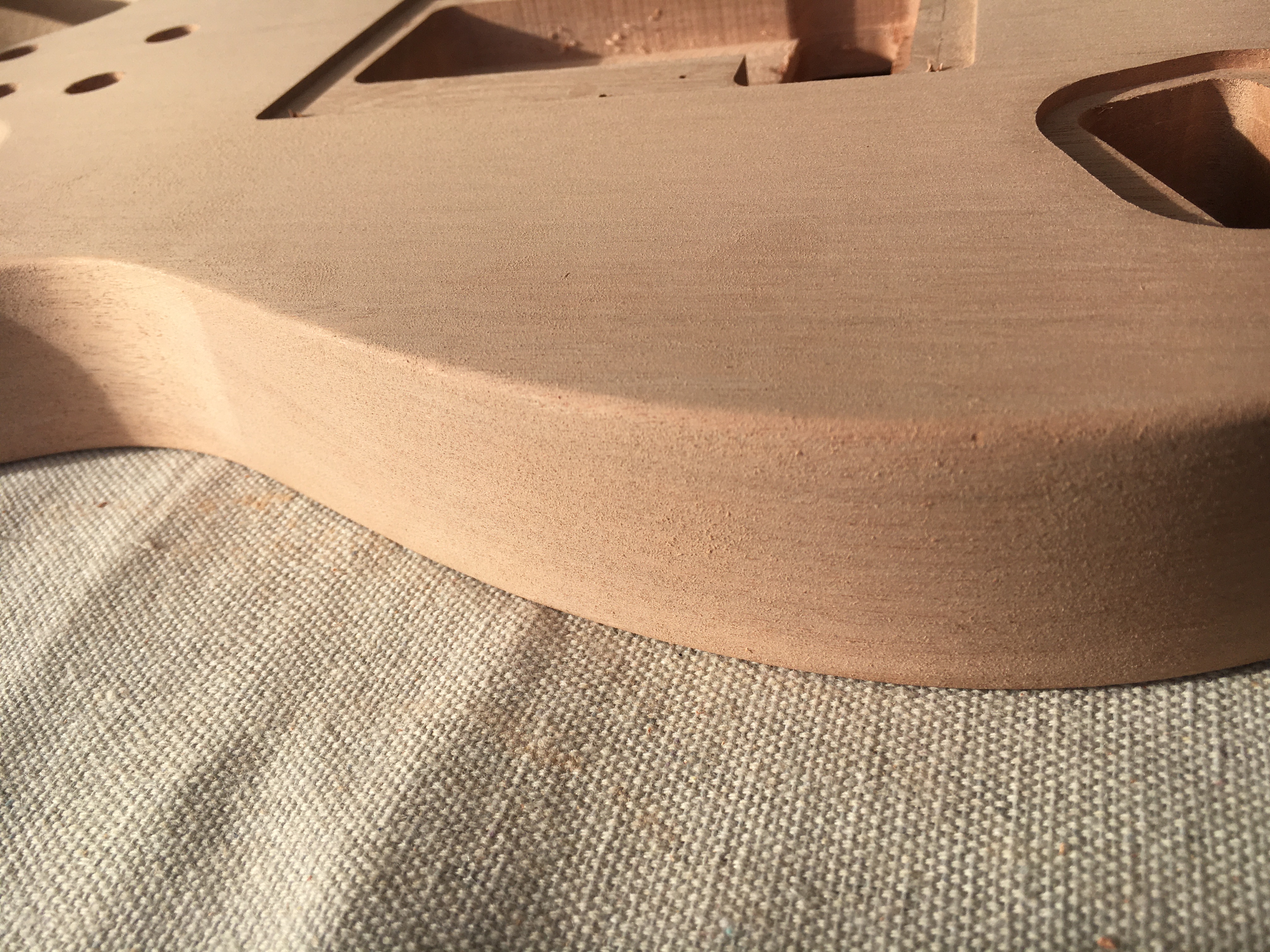 Finally we got down to a really smooth surface, and we were ready for paint.

I’ve always especially loved the hydro-dipped JEM models, like the JEM2K. I decided I wanted to hydro-dip my guitar too, though I’d never done this before. I wanted to go for more of a pastel palette, so I decided on a white base with royal blue, navy blue, purple, green, and pink.

The easy part of this color scheme was the pickups. I always knew from the very beginning that I would not keep the pickups that came in this kit but instead would special order some, since good pickups are one of the keys to a great electric guitar. I usually buy Seymour Duncan pickups and am a big fan of Seymour Duncan. But Steve Vai uses DiMarzio pickups. JEM pickups are generally from one of a number of families of DiMarzio pickups, all co-designed by Steve Vai: Evolution, Breed, Evo 2, Dark Matter, Blaze, and Gravity Storm. Reviews I read online seemed to indicate that I’d like the Gravity Storms the best. I was pleasantly surprised to find that DiMarzio was more than happy to let me order custom DP252FSP and DP253SP Gravity Storm humbuckers in the colors I wanted, so I ordered the bridge pickup in blue and white and the neck pickup in pink and white. For the middle pickup I chose a DP181 Fast Track in green.

This kind of treatment is how you earn customer loyalty. I expect I’ll be ordering DiMarzio pickups again (although I am still a Seymour Duncan fan). 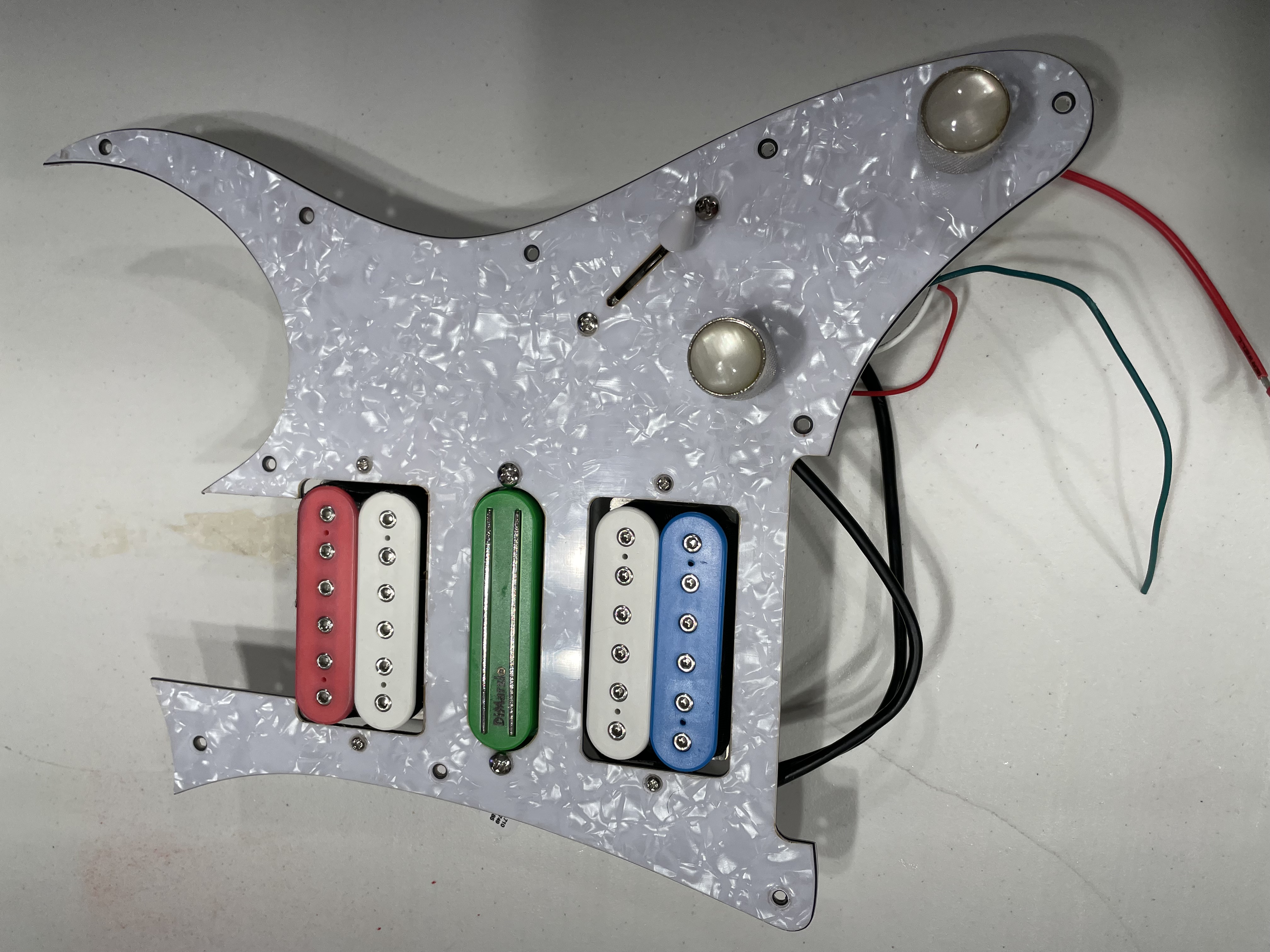 Next came painting the body. I’d do a handful of coats, then lightly sand to smooth out the finish, then paint again. The body probably had at least 30 light coats of gloss white paint.

Then it was time to hydro-dip. I admit I put this off for quite a while because I was afraid of making a mistake. Finally I decided to buy some regular boards I could use to experiment. I found a lot of websites and YouTube videos that claimed you could hydro-dip with spray paint. So I bought a bunch of spray paint in the selected colors. I carefully prepared the container of water to match the desired temperature, added the Borax bleach, and followed all the instructions as well as I could. Then I sprayed the spray paint on the top and dipped my practice board.

Disaster. It looked pretty terrible. Even following all the instructions exactly I did not get very satisfying results at all.

This is a good lesson in trying to “save” money by taking the cheaper option. I spent a lot of money on spray paint because those paints were cheaper than the hydro-dipping paint, but it was just wasted money.

So I gave in and ordered hydro-dipping paint from Magic Marble. Five different colors of paint was a pretty penny to pay, but this worked much better. I had great success with the first practice board, and then when I did the body it turned out even better. 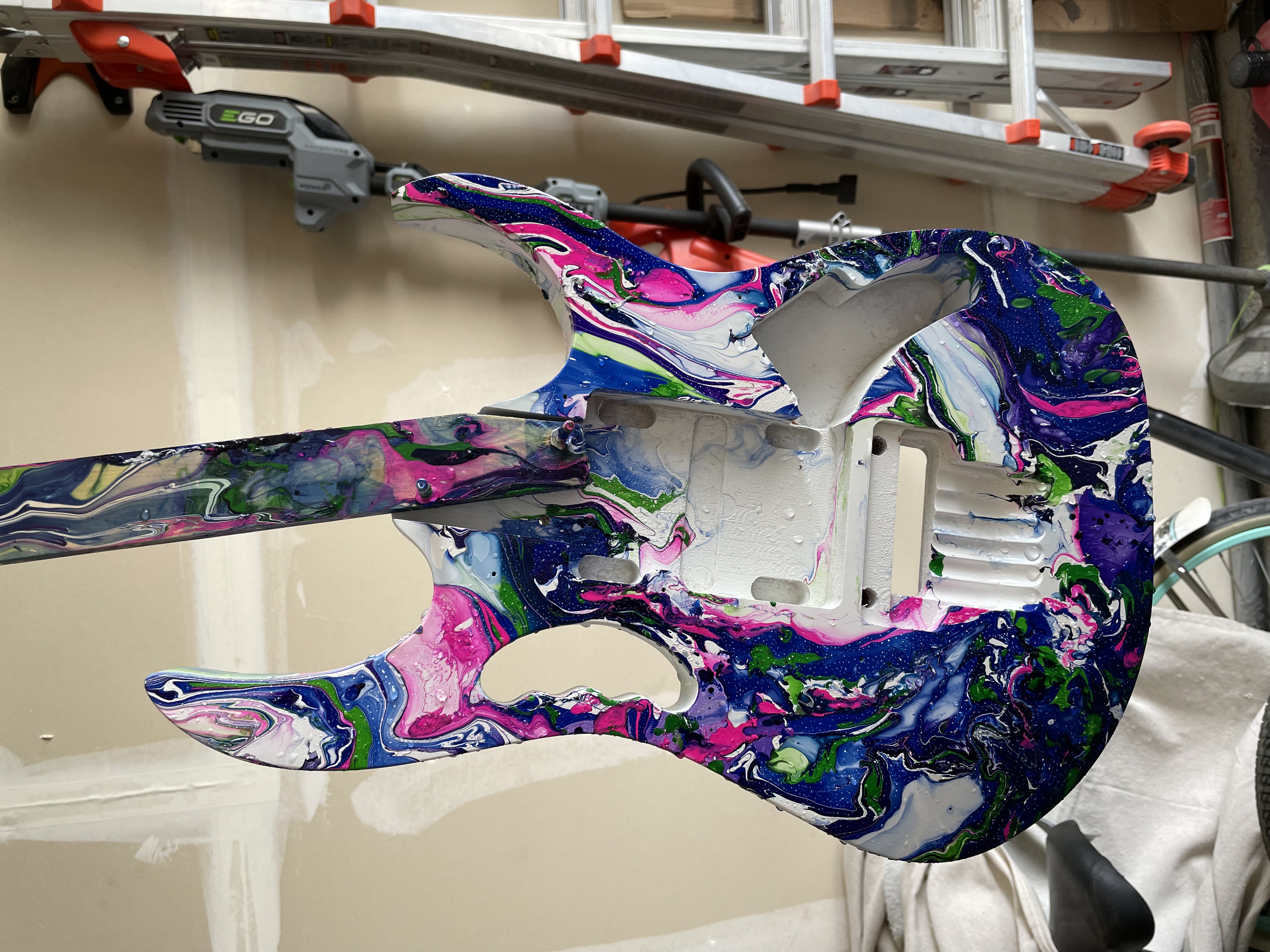 That paint job alone probably cost me between $200 and $300, but the results were worth it in my opinion. It looks fabulous.

After letting the paint dry for a good while, there was some very careful touchup work I had to do - carefully sanding down places where the paint had dripped or bubbled up, etc. Once I got that done it was time to finish the body. I chose a basic polyurethane spray lacquer to protect the paint. Most luthier-oriented websites recommend nitrocellulose-based lacquers instead - the general feeling is that they don’t inhibit the sound quite so much as polyurethane. But those lacquers do turn yellow over time, and refinishing this guitar body is not really an option considering the unique paint job. I wanted a finish that will last. And I have other guitars with polyurethane lacquers, so I don’t know what I’m missing anyway.

The general strategy for lacquer was:

I really struggled though to get the glass finish I was hoping for. The mistake I made was applying too many coats of lacquer after sanding it down with too fine of a sandpaper. I ended up with some dried layers that did not stick and ended up peeling off. It took a lot of sanding work to smooth the body out after that, and I was worried I’d go all the way through and ruin the paint. Luckily that didn’t happen.

So the end result is: Awesome paint job, lacquer is not quite as glossy as I’d like but I still think it looks great.

For the neck, I decided I wanted to just go with raw wood look for the head. The back of the neck I always knew I would not finish. This is a personal preference thing, but I don’t like a finished neck. My fingers don’t slide along the neck the way I’d like if it is finished. But I thought the head would look good with a finish on it.

I created a logo with my “brand” name (“Vybe”) and my “model” name (“Sapphire”). I chose the name Sapphire because a) it is similar to the Ibanez JEM (sapphire => gem => JEM), and b) because the sapphire is the birthstone of my most favorite person of all, my lovely wife Amber. So in a way it is named for her.

I had clear stickers made with the logo on them. I attached one to the head to display the logo. Here’s the finished head, lacquered with the same clear gloss polyurethane lacquer used on the body, and with D’Addario Auto-Trim Locking Tuning Machines mounted. These are my favorite locking tuning machines. 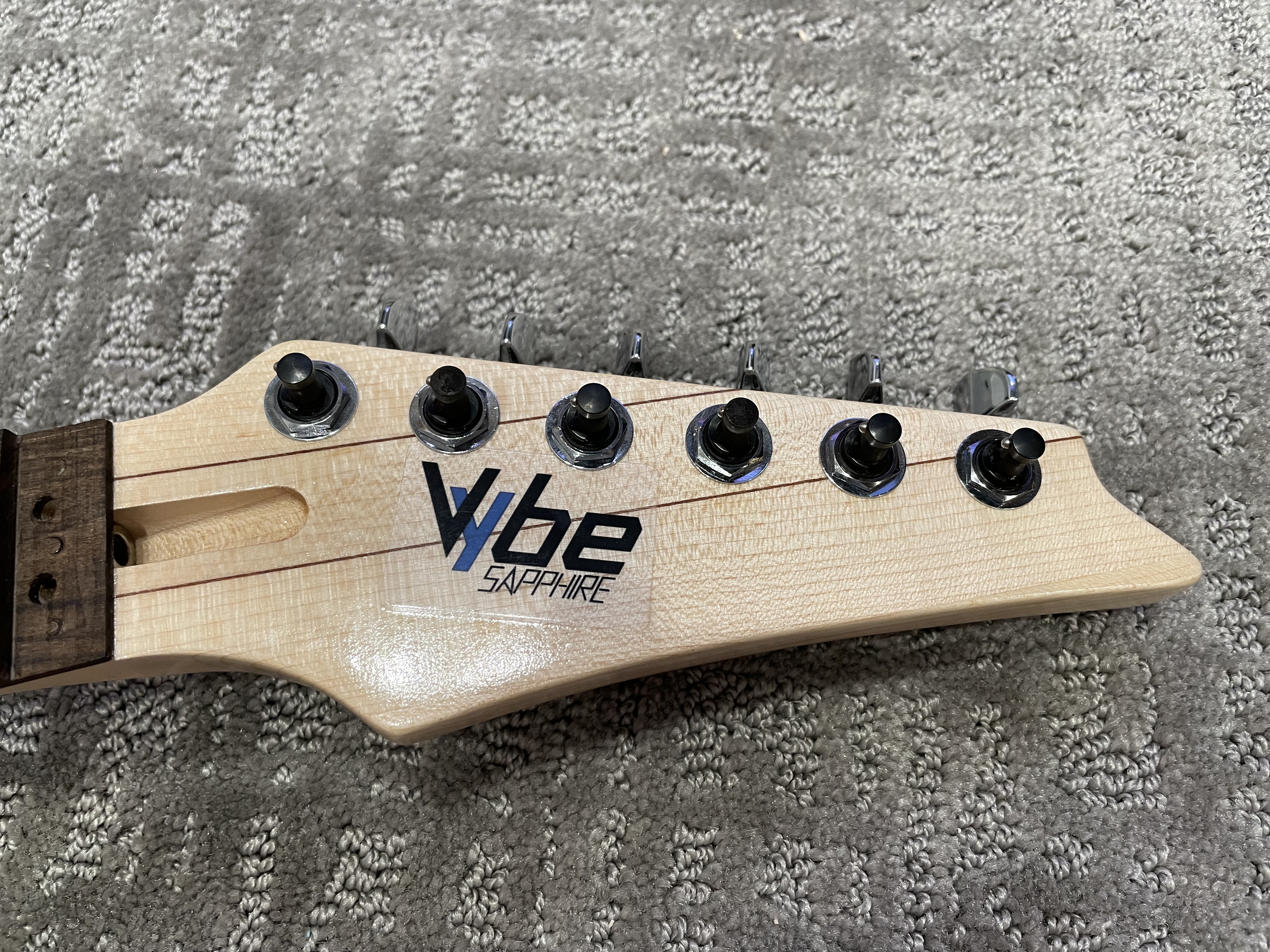 I wasn’t sure what I wanted to do for the back of the neck, so I did another experiment. With one of the practice pieces of wood I had left over from the hydro-dipping experiments, I sanded it down with 400 grit sandpaper and then divided it into three sections. In one section, I tried a matte finish polyurethane lacquer. In another section, I finished it with two coats of tung oil. And the third I left as just raw wood. After everything was dry, I liked the tung oil finish best, so that’s how I finished the back of the neck. It turned out really smooth and fast.

After waiting for a month for the lacquer on the body to completely dry, we finally arrived at the big day when I could start putting the guitar together. The neck was a snug fit and required a lot of work to get it sunk all the way down in the pocket, but I got it in there. Attaching the fretboard was pretty easy, as was mounting and soldering the rest of the wiring. The Floyd Rose was harder. I had Amber order this kit without all the holes pre-drilled on the body, thinking that I could just handle it and save a few bucks. Having done this, I would now advise against it. In particular, the two screws that hold the tremolo spring claw underneath the body are really difficult to drill properly without the right tools. I had to buy a special tool to make this work but still had to compromise a bit here.

When the rough assembly was finally done, I took it downtown to a music shop and had their guitar tech set it up.